Spotlight On: Vanessa Truvillion–Living in Dance 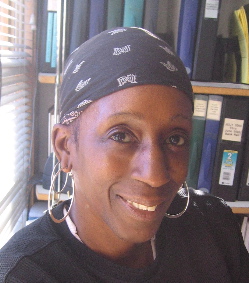 Why do we watch dance? What makes choreography good to some and bad to others? How should we approach live dance performance to get the most out of the experience? In this multi-part article, we asked several choreographers, teachers, dancers, students and laypeople to give us their opinion on what makes good dance.

In addition to her position as Chief Operations Officer at the Joel Hall Dancers and Center, Vanessa Truvillion, serves triple duty as a choreographer, teacher and dancer. “Sometimes I get up in the morning and ask ‘Why do you keep beating yourself down? Why do you feel that you have to be there 24/7? Why do you feel like you have to go do this and this?’ Because I do! It’s just what I do. You know, most people think ‘Oh god—I can’t wait until the weekend.’ But how can you just live for two days?”

“I do feel fortunate in my life surrounded by people like Tracy Valcy, Marshall Mitchell, Kirby Reed, and Duwane Pendarvis. We all gave up the “normal” life to be in this. I could have stayed in corporate America very easily. But I see now that I would have gotten very old very fast. I feel sorry for anybody who doesn’t love what they do. I feel lucky—it was a gift from God that I got out [of corporate America], struggle and all.”

Vanessa’s first live dance experience was not a performance, but an African Dance Class by the Julian Swain Inner City Dance Theatre at the YMCA on 63rd Street. In 1975, Vanessa was at the YMCA for a drama class and was drawn to the dance class by the sound of drums. She would hang around to watch the class until one day, Julian asked “Don’t you want to learn this? Don’t you want to do this?” Vanessa started taking the class and has been dancing ever since.

Why watch dance? How do we know that it’s good? We watch dance “because there is nothing more beautiful than the human body moving.” Vanessa believes, to achieve full impact, the dance and audience must be able to relate. And to be able to relate to the dance, one must see dance live. “You cannot get the essence of the person from a video. For me, I need to be in the experience. I need to be in it with them. I want to see where they go and what they feel and I don’t want to see it though a camera’s eye. It’s very difficult to video dance. You have to have somebody who really understands dance to capture it on film. We watch videos all the time[of ourselves] and we know we’re doing so much more than what that camera shows… There’s nothing more intense. Nothing. Because it’s mind, body and soul… you can’t get the soul from watching it on a screen.”

Vanessa believes dance is not esoteric. Great dance can be about everyday occurrences. “Choreographers, [like other artists] will create dances and make statements and around their passions. Life experiences.” And what of those people who place blades of grass on stage and eat an apple on it? “I think that’s fine. But that’s just not who I am as an individual. I mean, I need to see you moving and working, you know? …those other dance forms? It’s for somebody else. If one person creates it there’s somebody else out there that likes it. But it’s not me…like some of the songs I hear today, if I don’t understand it I can’t really get into it.”

“When I first started dancing, my family knew nothing about dance. My stepfather’s favorite piece of Joel Hall was “Street Life.” I think that’s the first time he experienced a set. It had music he could relate to as a black man. We’re talking about my parents , who had no introduction to classical dance. Not jazz, not ballet, nothing. It just wasn’t in their vocabulary. The only reason they were going was because I was there. But he had his friends come, and for a black man at that age to invite his friends and have them enjoy it—these are people that don’t watch this kind of stuff! They’d rather be in front of the TV watching a ball game! It was so much more than just a dance. You know, if they can get in to the music—these were people who were able to associate with the dancers. They didn’t know what you’re supposed to be doing,or look like, but they could say, “That girl—she looked like she was having fun!” If you were on stage having fun, they were having fun with you”

“We grew up thinking that was not acceptable in our neighborhood [in Gary, Indiana].” Vanessa credits Joel Hall for helping to change that perspective. We did “Month of Sundays”—and we…you know us black people, we’ve all been to church. We can get into church music, and all the children and adults jumping around with them skirts on—but this is fun! We’re in to it! That’s how we get the word out to people that dance is real. And that it’s not so unattainable.”

Vanessa Truvillion is credited as being a dancer, teacher and choreographer. As a member of the internationally known Joel Hall Dancers and Center, she serves as dancer and Chief Operations Officer. In October 1998, Vanessa had the pleasure of teaching a series of eleven workshops in Liverpool, England. She has been a driving force in the development of the performance workshops at the JHDC where she is also a popular faculty member. Among other dance companies in Chicago, Vanessa has been featured in the Chicago Passion Play, Najwa Dance Corp, and the Julian Swain Inner City Dance Theater. She was the choreographer for the 1997 hit movie “Soul Food”.