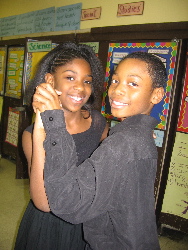 Natalie Davis is smiling. She is watching her kids as they try on their new dance shoes. They have five days to break them in before the competition on Saturday. “Today is dress rehearsal.” She hands out button down collared shirts for the boys. The girls are already in their dresses. What are you dancing? I ask one of the girls who is in mid twirl. “The fox trot. That one,” she points to another classmate, “is doing the tango.” The kids tell me 25 students wanted to join the new “Having a Ball” program at Madison Elementary school in October, but only 14 were allowed to participate.

Based on the New York public school’s ballroom program for elementary students, this pilot program was introduced to fifth graders in October 2005 to a select group of Chicago Public Schools. Each school was assigned a professional dance instructor who taught the dances to the students for a few weeks. The competition at the end of the program highlights what the students have learned. 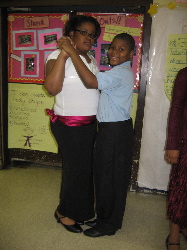 Ms. Davis tells me that it’s unclear what the judges will be looking for but she notes that they have already reaped great benefits from the ballroom class. “The program is voluntary and the attendance has been 100%. It’s really brought them together. There’s so much teamwork. I see such a difference in how they treat each other. Parent involvement in the school has increased as well.” I ask the boys what they like best about the class. “Dancing with the girls!” They smile and lace up their jazz shoes.
“I want to keep it up,” says Christopher Stephens. “And teach other kids. And get paid!”

They pair off and ham it up for the camera. Someone tells me: “There’s supposed to be 1000 people at the competition!” Tickets are hard to come by. I can imagine that this group won’t have a problem in front of a crowd. This group of 10-12 year olds has personality and charm. They look like they know their stuff. Natalie Davis is still smiling. Whatever happens on Saturday will be icing on the cake. “I’m so proud of them.”