Worry-Free Wedding Dances: Tips From Nino DiGuilio–May I Have This Dance™ Inc. 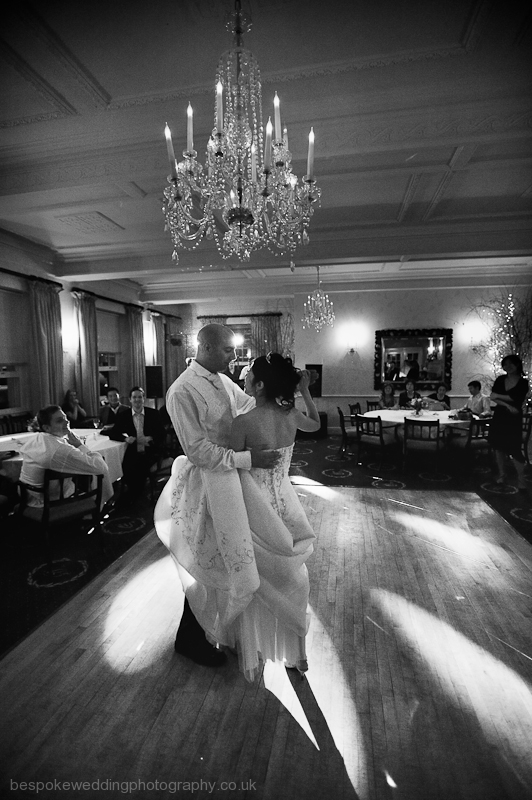 When is your wedding?

Sometimes we get couples two weeks before their wedding and are like, “We gotta get married!” For those couples with limited time, what we do is show them the basics. We might show them a little intro, a little dip, but then its just basics. Most couples, however, want something choreographed from start to finish. Usually, we recommend at least 15 lessons. At least. Our most die hard couple that set the record started lessons a year and a half before their wedding. They were here every week so they probably took at least 80 lessons, and their routine was awesome.

A lot of people are these days are doing non-traditional stuff. We still do waltzes and fox trots–those are still two of the most popular. But we’re getting couples that want to do a tango, they want to do a salsa, they want to do a hustle–just something to jazz it up. Or people mix it. They’ll do a little waltz and then it’ll break into something like a hustle or salsa. Nowadays that’s pretty typical.

When will you dance?

When people come to us for dance lessons, instead of just teaching them just the choreography, we help them think about the whole evening. The common formula is that people have their cocktail party or reception, then they announce or introduce the wedding couple, then they sit down and have their dinner and then they have their first dance. One of the things we have them consider is the timing of the first dance. We usually suggest that they do their first dance right after they walk on, like during the cocktail reception. It’s something that most couples have never thought about, but we highly recommend it for several reasons. Number one, they have a captive audience: So, all of a sudden they’re walking on and people are all standing, giving them a cheer. The second reason that you have a present audience: Nobody is running to the bathroom, having a smoke, or walking about waiting for dessert. The third reason is that it’s usually the most nerve wrecking part of the night. What they typically do is wait until after dinner, and all through dinner they’re so nervous because that dance is coming up. Once they get that over with they can enjoy the rest of the evening,

Other fun stuff to consider:

Another thing that people are doing nowadays is to hire us to come out and teach a lesson at their rehearsal dinner. It’s part of the bride and groom’s gift to the wedding party and that way the bridal party knows how to dance the next day. We get a lot of requests for that. We’ve also been asked to teach half hour mini lessons at receptions and provide DJ services for people who really enjoy ballroom or Latin dancing.

Nino DiGuilio
May I Have This Dance™ Inc.