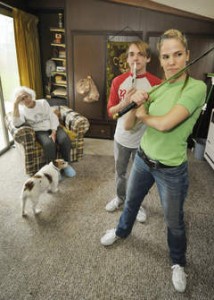 Kyle Frere is dancing, if you can call it that.

He’s moving side to side, wildly waving his arms to the pounding beat of techno music in a Midlothian living room straight out of 1978.

There’s a velvet tapestry of a cartoon baby cheetah behind him. His shirt is tucked into his tight jeans. He looks ridiculous. And he’s doing all this while holding a bottle opener that looks like a knife — which makes him look both ridiculous and potentially a threat to himself...read more